As a young boy, and still to this day, I am fascinated by all things mobile and any related technology. This is what spurred me on to get involved as an international volunteer at the Bridgestone World Solar Challenge (BWSC) in Australia in October of this year, a dream come true for a vehicle obsessed individual like myself!  Having been involved in a number of large scale events throughout my career, and with first-hand experience of the South African based Sasol Solar Challenge, I set out with a vision - to learn as much as I possibly could, network as far as possible and with some luck, potentially recruit some international teams to join our event back in South Africa scheduled to take place in 2020. And so on October 1st my adventure started, where I boarded an aeroplane and flew halfway across the world to chase the sun through the Australian Outback.
The event was scheduled to take place from 13 - 20 October 2019, starting in Darwin in the Northern Territory and travelling down the Stuart Highway to Port Augusta via Highway 1 where the event would finish in The City of Adelaide in South Australia (approximately 3000 km) with the official finish being in Adelaide, at Victoria Square/Tarntanyangga. 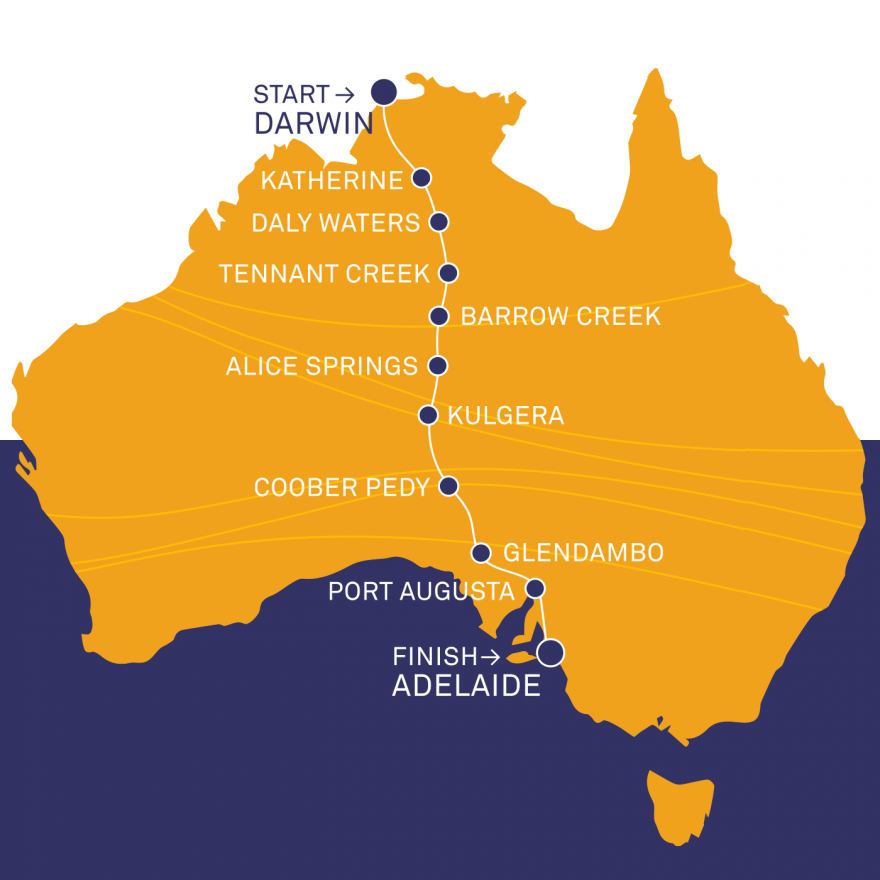 I was fortunate enough to travel with a number of other international delegates, including the event directors for the Chilean and American solar challenges as well as senior figures from the Bridgestone World Solar Challenge and the Event Science Faculty. Our roles included portfolios such as Scrutineer, Scrutineer Assistant, Observer and Control Stop Manager where we maximised the networking opportunity to promote the South African Solar Challenge. 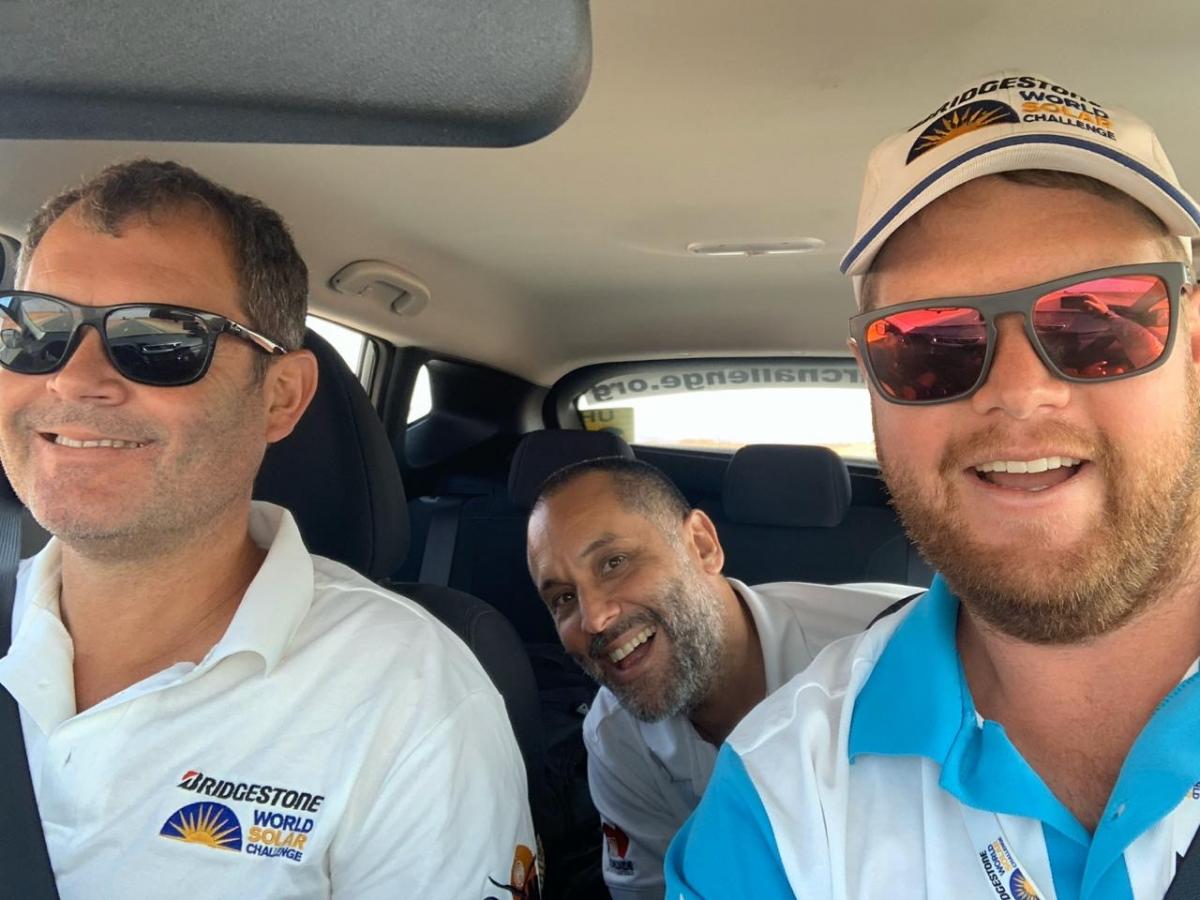 It was fascinating to note that many of these volunteers had been doing this for a number of years already, and most were old friends. So the BWSC was just an excuse to meet up every two years, swap stories and share their passion for engineering and pushing the limits.
As a result of being away from home for three weeks of travelling and literally living out of a suitcase, I gained a new sense of respect for the organising teams who put on an event of this stature and the all hard work that goes into the process. From Sunday the 3rd until Saturday the 12th of October, the event was based in Darwin, Northern Territory, where time was set aside for the pre-event scrutineering, track testing, pre-event team prep and various other activities. 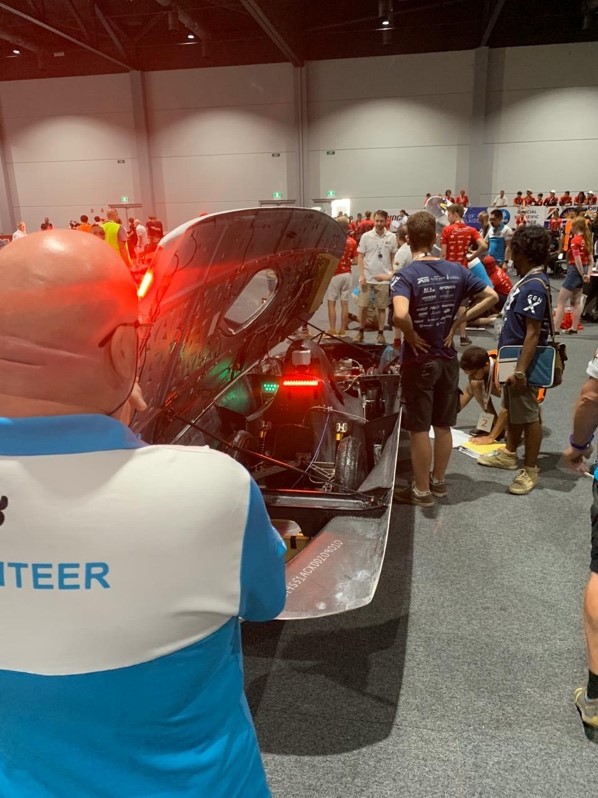 During this time, I was able to interact with all the international teams and took advantage of spending some invaluable time with the Bridgestone World Solar Challenge Event Director, Mr. Chris Selwood 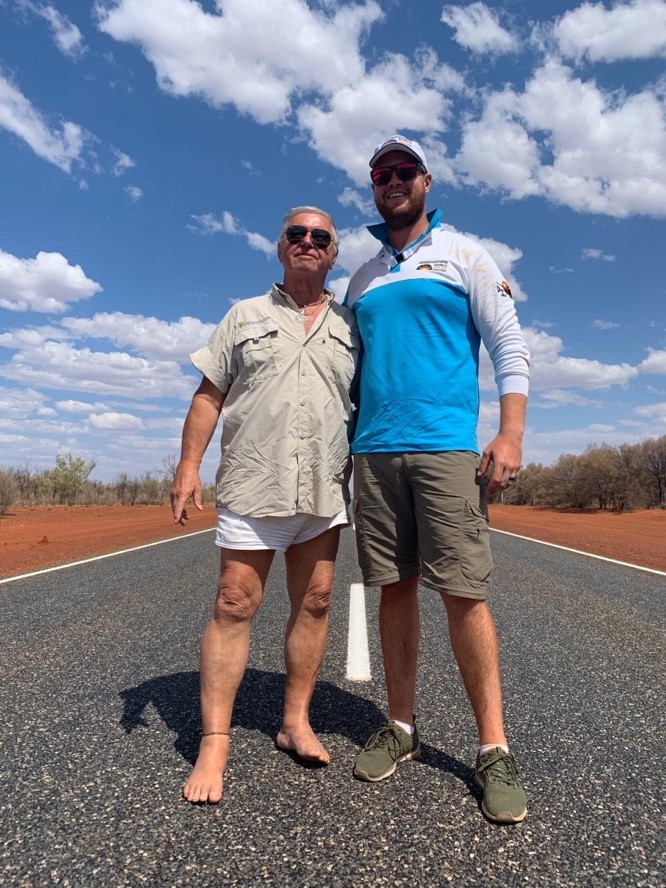 The quintessential ‘Ozzie’, Chris has been a part of the BWSC since the 80’s. Read more about his knowledge and experience here:   https://www.worldsolarchallenge.org/blogs/2018/11/19/one_on_one_with_chr...
Day-one (Sunday the 13th) began with overwhelming excitement as the journey of just over 3000 km began, with teams travelling down the spine of Australia from Darwin to Adelaide. For seven days we travelled through towns such as Daly Waters, Tennant Creek, Barrow Creek, Alice Springs, Coober Peddy, Kulgera, Port Augusta and finally arrived in Adelaide.
Traveling this route is tough, it is vast and desolate! This is what makes the BWSC an extremely difficult accomplishment, crossing the Australian outback in a car powered by the sun is no easy feat. It was amazing to see the camaraderie in this event, how the teams assisted each other even as competitors. Ultimately the race is one big team, with individual cars, sharing their knowledge and their expertise and helping each other to reach the finish line. 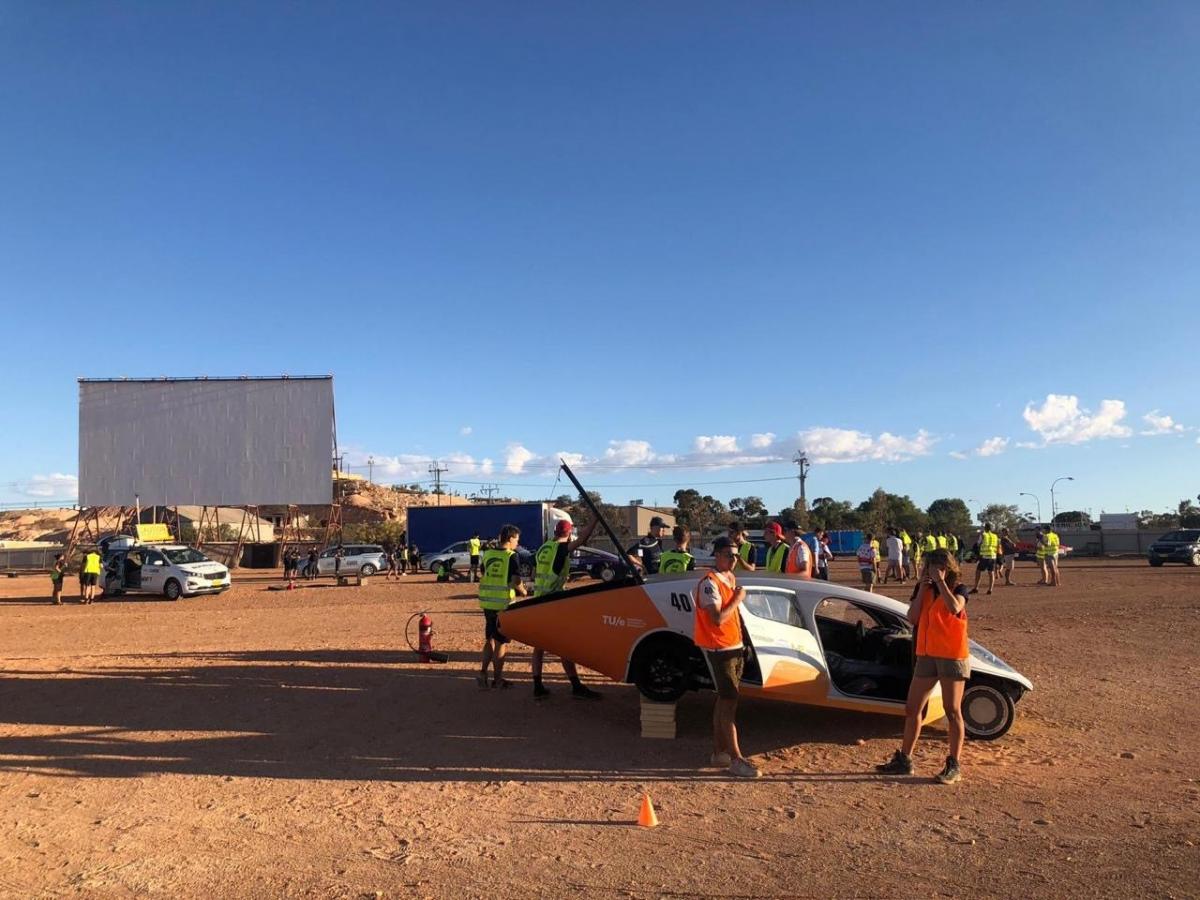 One particularly interesting experience was visiting the world famous Daly Waters Pub, a now almost 90 year old historical landmark. It reminded me of a little pub back in South Africa, in a small town called Barrydale, ‘Ronnie’s Sex Shop.’ Similarly, both pubs have a display of bra’s hanging from the roof - a token of each female visitor who has been to the pub (different speculation for each pub as to why this happened).
What is it with small towns and odd traditions in their pubs? 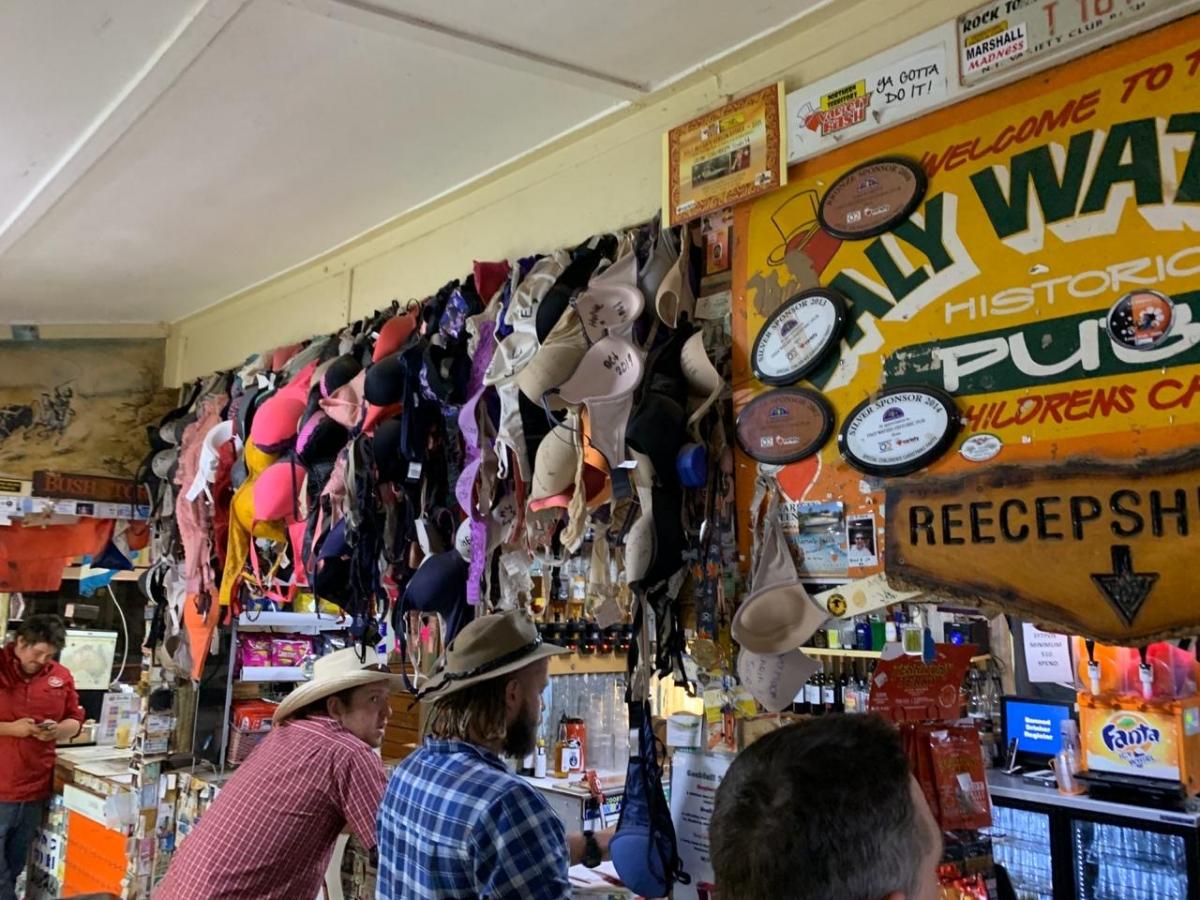 Another memorable day for me, in particular, was Saturday the 19th of October, a day spent attending various international talks and seminars on green mobility, renewable energy and Cruiser Class judging. The Cruiser Class was introduced in 2013 to bridge the gap between high-end technology and everyday driving practicality and are focused on much more than speed. Cruiser Class cars are judged on energy efficiency, passenger kilometres travelled and design criteria that include interior comfort, features and marketability. Find out more about this here  https://www.youtube.com/watch?v=9XiI5OQgjs8 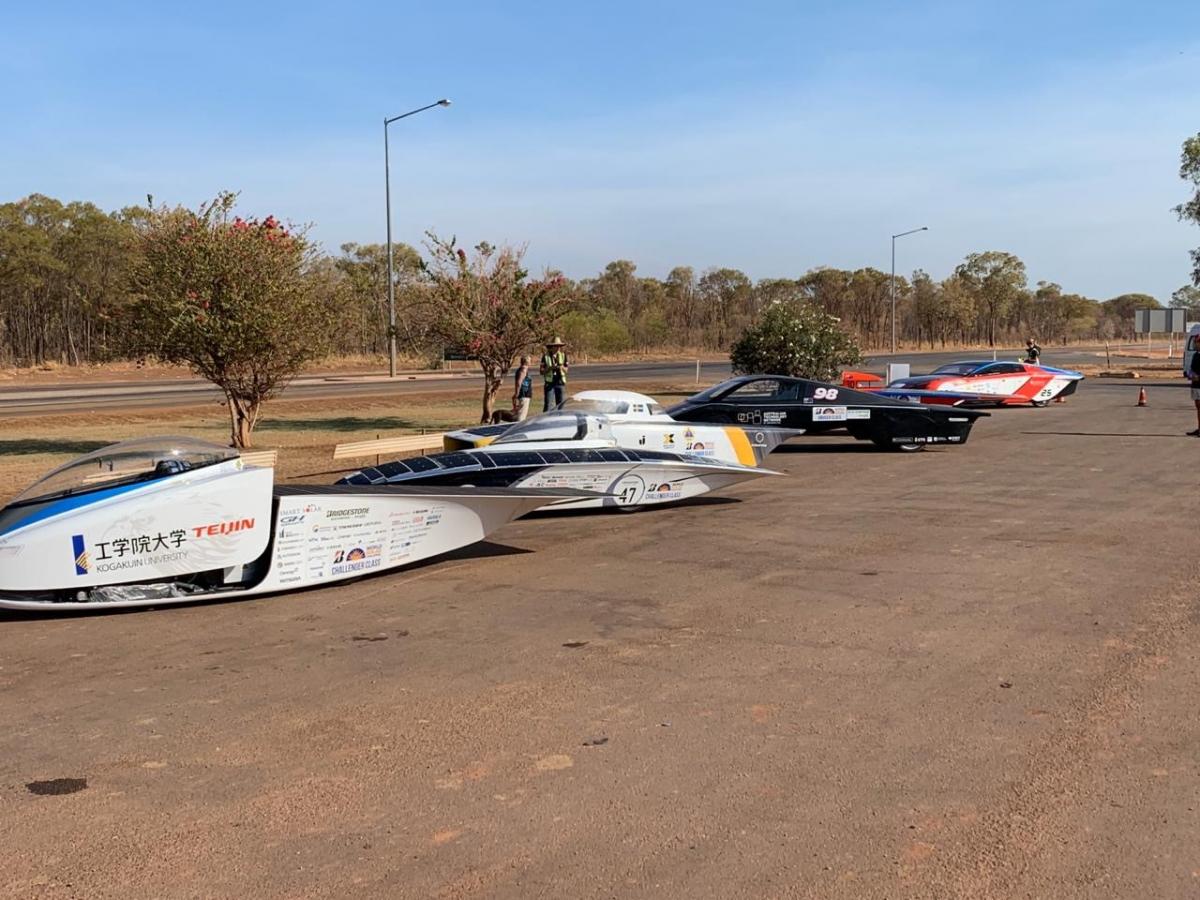 Key learnings for myself, as both a spectator and a volunteer, was the amount of effort from every single member of each team. Whether as an organiser, or competitor, every person involved performed to the maximum level and the result was nothing short of spectacular.
Witnessing the event at this level has inspired me to continue working towards producing a similar one in South Africa, one which is comparable to, and perhaps even better than its international counterpart.
Massive thanks to all those involved in providing this once-in-a-lifetime experience, definitely one for the books!
Date:
Friday, November 29, 2019